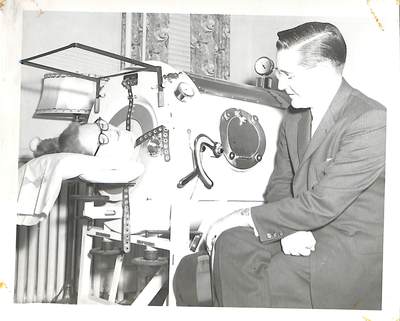 Martha Mason of Lattimore, NC graduates. Mason contracted polio as a child and completed her education in an iron lung. She would later go on to write the best selling memoir Breath: Life in the Rhythm of an Iron Lung and appear in the Oscar nominated documentary about polio The Final Inch.

Photo Description: Martha Mason, a survivor of the 1948 polio epidemic, attended Gardner-Webb College in an iron lung. A prolific writer and subject of the documentary "Martha in Lattimore," she is believed to have lived longer in an iron lung than any other person. (Photograph is dated December 17, 1956)